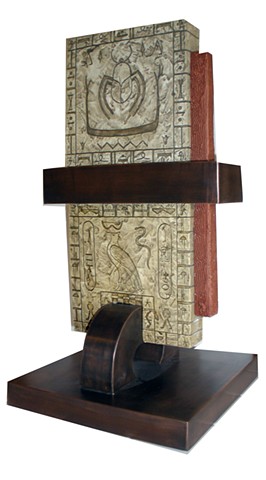 This piece is about exploring the universal belief in an afterlife, using ancient Egyptian symbolism and hieroglyphs.

There are four different panels or “Cartouche”. I suppose the best way to define a Cartouche is to say it is a separate thought, paragraph or story.

The two on the top symbolize different concepts of life and life experiences. The two on the bottom deal with symbols pertaining to what ancient Egyptian culture called the “Afterlife”. This is a concept later adopted by Christianity and meaning heaven (or hell).

The central copper form represents the barrier between the two worlds while the red vertical element represents the “Life Force” which endures and connects both worlds.